It's Sunday. Three weeks ago I started a new system with the children with chores. Prior to this system I was getting tons of whining as no one wanted to help me around the house or they would bribe me and say, "If I do it will I get a lolly?" It was getting so bad that they expected something every time they did something. So I decided that I had enough and started an allowance system instead. We don't have much money extra after paying our bills but I am saving all my coins and putting them in a jar so I can use it for their allowance at the end of the week.

So what do I give them for allowance?

Each child earns $1 a week for doing their weekly assigned chores. I know it's not much but right now that's all we can afford to give them. I pay them in coins so they get so excited when I give them tons of coins including pennies for their piggy banks and yes they are competing on who gets the most money. Are you scratching your head here saying what? How do they compete if they only get $1 a week? Well, say for example it's time for chores. Justin is assigned dishes all week. If I ask him to do his chore and he whines and complains and doesn't want to do it. He can ask his sisters to take the chore over for him. Then Justin loses 10 cents and the sister that volunteers and dose his job earns his 10 cents. It's very simple. You work you get paid. If you don't work you don't get paid. I have the following chart set on my fridge. X stands for they did their job. O means they didn't do their job and someone else did it for them. The *'s I'm using for if they do something unexpected without any whining and volunteered or took over a job. They earn 10 cents extra for each star.

It's time to tally up their allowance for the week. If you look at the chart below you can see what I am doing. I took the photo of the chore chart before I erased the totals for the day so you could see how I calculated their allowance. 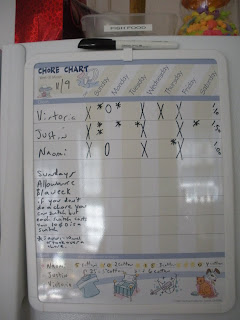 Under the chore chart is their assigned duty for the week. It is a 3 clipboard that I got from Stampin' Up. I decorated it with Stampin' Up paper. I put their initials on the top clip and I printed out chore cards to clip on them. These cards get rotated every Sunday. So they are responsible for that chore the entire week. I have this hanging on my fridge with a very big magnet that I got at AC Moore. Under the chore cards is a white spot where I put velcro. My intention was to make little coins and attach it to them as the chores were done but wound up using the above chart white board that I found at Target a while back. Still don't know what I will do with the velcro part. Time will tell. 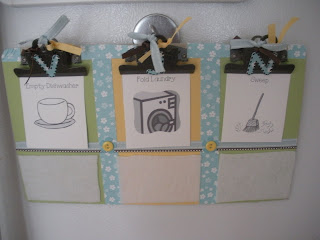 Email ThisBlogThis!Share to TwitterShare to FacebookShare to Pinterest
Labels: chores

What a great system! I love it! It is simple to keep track of and simple for them to understand. Thanks for sharing!

What a great idea! I did that once or twice or three times with my kids...hee hee...frizzles out after a while once all the excitement has gone. Now I just tell them if they want their monthly pocket money they have to keep their rooms tidy, hang up their towels and put their clothes in the wash basket.

Like this simple idea, and I like that it's down-to-earth. None of this $20 a week stuff. Heck, I don't get paid anything for being a mom & staying home to take care of everything.

Thank you for sharing I am going to try your system. My house is in the same "what do I get for doing it" mode that your's was in. And I appreciate you keeping the pay low as we cannot afford to pay kids a ton of money for expected responsibility chores.
Again thank you!